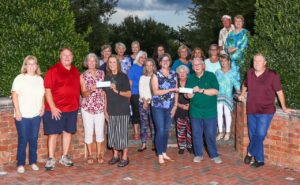 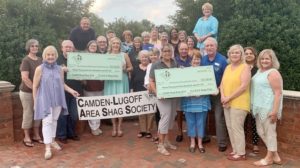 Surrounded by members of CLASS — the Camden-Lugoff Area Shag Society — representatives from the Community Medical Clinic of Kershaw County and Food for the Soul accept checks for $3,100 each from the shag enthusiasts on July 25 on Camden’s Town Green. CLASS raised the money during its annual shag blast, held this year on June 15. – photo by Martin L. Cahn/C-I

2018 0727    –   The headline from the Chronicle-Independent’s “People and Places” reads, ” CLASS donates $5,200.”  The following information has been extracted from their featured article. 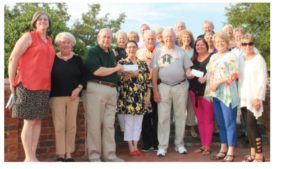 CLASS Shag Club donated $5,200, with $2,600 going to the Community Medical Clinic of Kershaw Count (CMC) and Food for the Soul of Kershaw County. Both Organizations received a check for $2,600 during CLASS’s regular Thursday night meeting, held July 19, at the Venue on Broad in downtown Camden . The club is celebrating its 31st anniversary. For the last 31 years, it’s been important to the Camden-Lugoff Area Shag Society (CLASS) to actively give back to their local community. Since 1993, CLASS has donated almost $53,000 to local non-profits in Kershaw County. The majority of these donations were generated by the organization’s annual Shag BLAST — a yearly gathering featuring beach music, food, and lots of dancing. This key event began in 2005 and has grown over time.   All. proceeds from the Shag BLAST are donated to Kershaw County nonprofit organizations. CLASS is pleased to support such outstanding and vital non-profits that provide such an important service to Kershaw County, Shag BLAST committee chair Ray Amyette said.“We’re all about having a good time and being actively involved in our community,” Amyette said. “It’s part of our mission. We want to support folks and we want them to come out and be a part of CLASS. It’s all about community.” CLASS’s mission is to promote and preserve the heritage of beach music and shag dancing Shag is the official South Carolina State dance. CLASS strives to provide members and guests with dance opportunities as well as education on the art and history of shag dancing. A second part CLASS’s mission is to provide charitable service to our community, Amyette said. CLASS was formed in 1987 and this year it celebrates its 31st anniversary as the original shag club in Kershaw County. This year CLASS also celebrates its 30th anniversary as members of the Association of Carolina Shag Clubs (ACSC). The ASCS was founded in 1984 and today it has more than 100 shag clubs as members. In its second year, CLASS became one of the very early shag clubs to be recognized as a member of the Association of Carolina Shag Clubs CLASS meets every Thursday from 7 to 10 p.m. in the Venue, 1021 Broad St., downtown Camden. Free shag lessons are offered the first hour. CLASS encourages everyone to join the club for a night of great dancing and fellowship.